True Jackson is the lead character of True Jackson, VP, who works at a fashion company called Mad Style and is super kind. Throughout the course of the series, she serves as Vice President of the youth apparel division, but, in the finale, becomes president of the company, after Max Madigan, the previous president, retires. She is first hired at age 15, when Mr. Madigan notices her wearing one of his designs, with a True Jackson twist.True was talking about our parents

True Jackson's first appearance is in Pilot, where she was selling sandwiches with Ryan in the lobby of the Madigan Building, where Mad Style is housed. Max Madigan sees her outfit and is impressed, making her Vice President of Youth Apparel at Mad Style. True invites her friends Lulu and Ryan to help her out on her first day. True enjoys the job at first but later sees that most people from the company don't like her ideas and personality, particularly her co-worker, Amanda Cantwell. True considers quitting, but she instead changes her mind, after she's comforted by her boss' nephew, Jimmy, whom she develops a crush on. True fires her assistant, Cricket, and Lulu becomes her new one.

Later in Firing Lulu, True must decide whether to fire Lulu after she continuously makes mistakes with one too many of True's projects. After True fires Lulu, True begins to feel ashamed for firing her best friend. Feeling guilty, True asks for Amanda Cantwell what she would pick if she had to choose between friendship and business, and Amanda tells her that she'd easily choose business because she has no friends. Following this, True has a daydream about what it would be like to have no friends at all. She is actually a teen version of Amanda. Realizing her mistake, True is set to apologize to Lulu and re-hires her.

In Babysitting Dakota, Amanda assigns True to look after a famous supermodel, Dakota North. But True realizes that she is difficult to take care of. Lulu believes Amanda did it to make True's assignment harder. True tells Dakota that she should go and have fun instead of being cranky and advises her to go to her friends party, but True doesn't realize that the conference is taking place that same day. True needs to find out what to do before the conference starts, or she'll be fired.

In Ryan On Wheels, True must design skateboard clothes and Ryan Sheckler is coming for a visit. Ryan helps True by putting on the clothes. He tells her the skate park is only for boys. After hearing this, True and Lulu go undercover as boys, only to realize it is a cover so they won't go and find out Ryan can't skate. Unfortunately, they find this out after they bragged about him. They sign Ryan up for the expedition race. Ryan Sheckler goes undercover as Ryan to help him win so no one will know that the real Ryan can't skate.

In the Prototype, it is Friday the 13th, and we learn that True is superstitious. True lends Lulu a dress from the vault for her to wear at her cousin's dance party, unaware that it is a one-of-a-kind prototype. When True finds out, she and Amanda must get the dress off Lulu at the dance before Max finds out and True's lucky streak breaks. At the end, Jimmy and True hug each other and end it with a kiss.

In ReTRUEnion, True, Lulu, and Ryan find Amanda's old High School yearbook. When they check it out, they find out that Amanda used to be a dork to all the other kids. When True finds out that Amanda was going to take revenge on the popular girl in their High Schol Reunion, she stops her from doing it.

The episode True Takes Iceland, When the head of Iceland's largest retail chain visits Mad Style, Amanda and True along with their assistants compete to see whose design gets to be featured. Meanwhile, Ryan tries to impress a model by saying he's the vice president.

In Fashion Week, True is determined to present her dream dress in the Young Designers Showcase during fashion week. But, Jobi was Amanda's old assistant who disapproves True's design. Meanwhile, Ryan brings his hamster Chewy to Mad Style, which causes chaos. Chewy runs over Kopelman, and gets into Mr. Madigan's piano. Thus, Ryan and Jimmy are forced to team up to get Chewy out of Mr. Madigan's office before any more trouble is caused.

In True Crush, When True is invited to the Last Minute Ball, Lulu and Ryan fight over who goes with her when she only has one extra ticket, but True actually wants to go with Jimmy. Meanwhile, Ryan uses a prank that he used in a dream to trick Amanda's new assistant, Laura. But, when Laura quits Ryan must perform Amanda's work without letting her know. Elsewhere, model Vivian overhears Amanda calling her an idiot and fools Amanda by acting like one. In the end, Jimmy and Vivian go to the Last Minute Ball together, and True, Lulu, Ryan and Amanda spend the night at Happy Berry Yum Yum.

In Hotshot, Mr. Madigan hires another teen fashion designer for Mad Style called Jasper. Meanwhile, Lulu helps Ryan prepare for his history test by making it believe he's on a game show in his mind. True feels that Mr. Madigan cares more about Jasper than about her. But, True discovers that Jasper is a phony when he steals her "Back to School" design and gives it to Mr. Madigan. When Jasper becomes the new VP, he must present his design to the other VP's. When Mr. Madigan sees the design when it's not on paper he can tell that it is True's, not Jasper's, because of the lining. In the end Jasper gets fired.

In the Last Episode called The Dance, when Mikey J doesn't ask Lulu to the Back-to-School Dance, she thinks that he and True are going out when she finds True dancing with him. But True confronts Lulu and tells her that she was teaching Mikey J how to dance.

In the first episode of season 2 (as well as a movie), Flirting With Fame, True falls head over heels for a new student named Justin, who ends up being rapper Lil' Shakesphere in disguise. The two are kept apart at first by his bodyguard Kayla, who doesn't think it's good for Justin to be involved in a romance at this time with his career. However, the two manage to date anyway, until Justin learns that he has to tour as Lil' Shakesphere in Europe for a year, ending his relationship with True. Soon, we find out Jimmy left flowers for True (not Justin, who she initially thought it was) because he really likes her and turns down a scholarship program for flight attendants because he wants to spend more time with True and other school work.

In the episode The Reject Room, True finds out that she has designed clothes that Mr. Madigan didn't like that ended up in the reject room. Frusturated, True seeks out to Mr. Madigan at first to see if he would fess up about "the reject room", but Madigan keeps lying about not liking some of True's clothes. Later on, an upset True tells Mr. Madigan about it and he tells True that many others working at Mad Style have had things end up in the reject room and to not get discouraged about it. He apologizes to True for lying to her and then says that a person isn't measured by how many successes they have, but how they handle they're failures and missteps, encouraging True to keep designing. True becomes the president of Mad Style after Max retires to take care of his child that he and Doris are expecting.

Despite being young and slightly naïve, True is shown to be good at her job. She often comes up with new ideas for designs, and nearly everyone at the company is open to those ideas, save for Amanda. Also, True is generally willing to do the right thing and stand up for what she believes in, even if it's not the easiest thing to do and could mean losing her job. This is shown by her being willing to make her best effort not to let others get to her, such as Amanda. True generally displays a positive attitude, though will get cranky if you get on her bad side.

Jimmy is True's boyfriend, Max Madigan's nephew, and the mailman at Mad Style, whom True first met in the pilot. It is implied they've both had a crush on each other since then, albeit they kept it a secret for a while, then later revealed it. They officially become a couple in True Kiss, but, until the end of True Secret, decide to keep it a secret, due to Mr. Madigan's policy against co-workers dating, which he later abolishes.

Justin, a.k.a. Lil' Shakespeare, is True's famous ex-boyfriend, a rap star, whom she briefly dated in Flirting With Fame, before he left to go on tour in Europe. They were supposed to get back together later in that season, but it never happened as True started dating Jimmy. 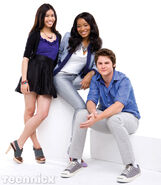 Add a photo to this gallery
Retrieved from "https://truejackson.fandom.com/wiki/True_Jackson?oldid=5836"
Community content is available under CC-BY-SA unless otherwise noted.